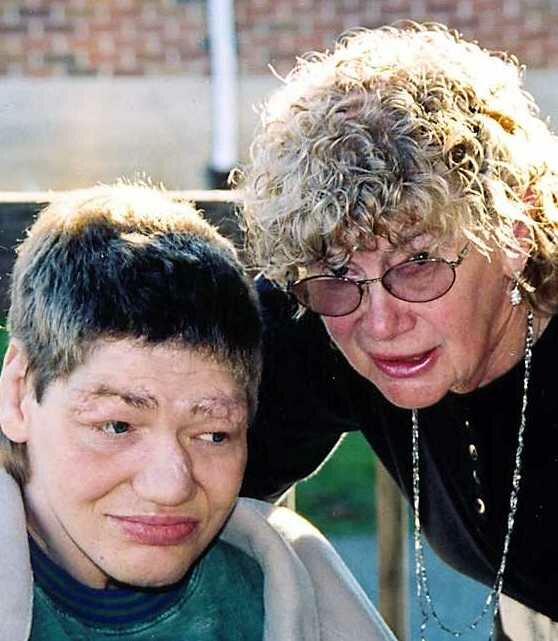 As a toddler, Billy suffered uncontrolled life altering epileptic seizures which left him permanently delayed developmentally with many devastating and complicated health issues. Most notably as the grand mal seizures inflicted their damage and as he grew older, he lost the ability to walk and to verbally communicate. During the 60’s and 70’s, families were not able to, or equipped resourcefully to deal with the complexity of health issues for Billy. At the insistence of medical professionals of the time, our family made the reluctant decision to place Billy in the Ontario Hospital School (Orillia) in 1964.  44 years later, Billy emerged as an institutionalized era survivor from the now known as and permanently closed Huronia Regional Centre. During this time Billy incurred many life altering injuries, illnesses, surgeries and further degenerative impairments. Billy never attended school, never held a job, never had a girlfriend, nor did he live life in the traditional sense that we take for granted. The once fully robust playful young boy would emerge a significantly altered and embattled soul.

Life, however took a 180° course correction and positively changed for Billy in 2008 when he was introduced to community living and his new home with Participation House (PH) in Bowmanville. Billy was one of the first residents to PH’s newly constructed house specifically modified for individuals with varying degrees of abilities and quickly excelled in new friendships, community inclusiveness, meaningful development and a sense of real purpose despite his many challenges. Always sporting a smile, slight grin or occasional giggle to let you know he was happy. Turns out his favourite developing hobby was “girl watching”, go figure! A real eye for the ladies affection, particularly if you were preparing his favourite meal. Speaking of meals, Billy was a real foodie, could put to shame any hot dog or pizza eating contestant and never had an ounce of fat to show. He loved Chinese food, the next time you’re at the Mandarin in Oshawa, check out the picture of Billy at the front door with the caption that reads, “this guy pays full price, no disabled discount”. Billy would always brighten up when Danny visited, as it was a sure guarantee that he had Billy’s favourite of either pepperoni pizza, chocolate cake or a Caramilk bar, whether just for a visit, special occasion or simply to share lunch with friends at PH. Eternally grateful that Danny, Samantha and Belle - the service dog, got to share pizza (Belle was on high alert for all pizza that hit the floor), chocolate and Christmas celebrations with Billy, his friends and staff a week before Christmas this past December.

Sadly, in the latter half of January, Billy became ill at home, tested positive in the ER for COVID and although asymptomatic, he was transferred and admitted to hospital in Oshawa with severe de-hydration and ironically his reluctance at first and then finally rejecting sustainable nutrition and fluids. Upon his release from Oshawa in early February, less than 24 hours later he was taken back to Bowmanville ER and subsequently readmitted to hospital in Bowmanville. His prognosis and subsequent symptoms most likely associated with the virus, but not statistically attributable by the Province’s count to his passing. COVID is still taking lives needlessly and it may be or soon will be a moot point to say please get vaccinated or please keep your distance, so how about please be kind and respect one another for their views and their right of safety in dealing with Covid.

The family would like to sincerely thank the many staff, nurses and doctors from the ER, 2nd Floor Medical Unit and the Complex Care Unit at Bowmanville Lakeridge Hospital for the loving care that Billy received in his final days. A special shout out to Dr. Thow, Billy’s personal care physician since 2008 and the only doctor we know that answers his cell phone on the first ring. Special mention to Pastor Doug Ferris for his comforting support and prayers for us all in our time of need.

Finally, a profound thanks to Lisa Johnson at Participation House who has been with Billy from day one in 2008 and to her numerous support team members over the years, Janice, Yvonne, Eric, Vee, Urvi, Helen and to other staff whom we have probably unfortunately missed. A special thanks to Helen and Urvi who went beyond the call in assisting Billy in the hospital and being there when it counted most. PH staff was really Billy’s extended family, he was really loved and will be sadly missed. Most regrettably we were unable to reunite Billy in his final hours back home where life really began for Billy in 2008. Thank you to PH for showing Billy a new life direction, real sense of purpose, happiness and conclusion to his journey.

At the request of the family, Billy will be cremated with no service at this time. Life celebrations for Billy are to be arranged by the family at a later date. Since Billy was a true testament akin to a warrior throughout his life and the battle scars so evident, the family asks that in lieu of condolences of flowers or other non-descript donations that you please give generously to the Canadian Red Cross in support of the Ukraine Humanitarian Crisis Appeal.

“Just a few short days ago, a nurse had combed your hair back James Dean style and I swore I was looking at young version of  dad. You appeared so alive, a twinkle in your bright blue eyes, a devilish toothless grin and an insatiable taste for sweets is how I will forever remember you by.  Taken from each other as young boys and now once again as we grow older, your battle is over, rest easy now… my inseparable brother.” DL