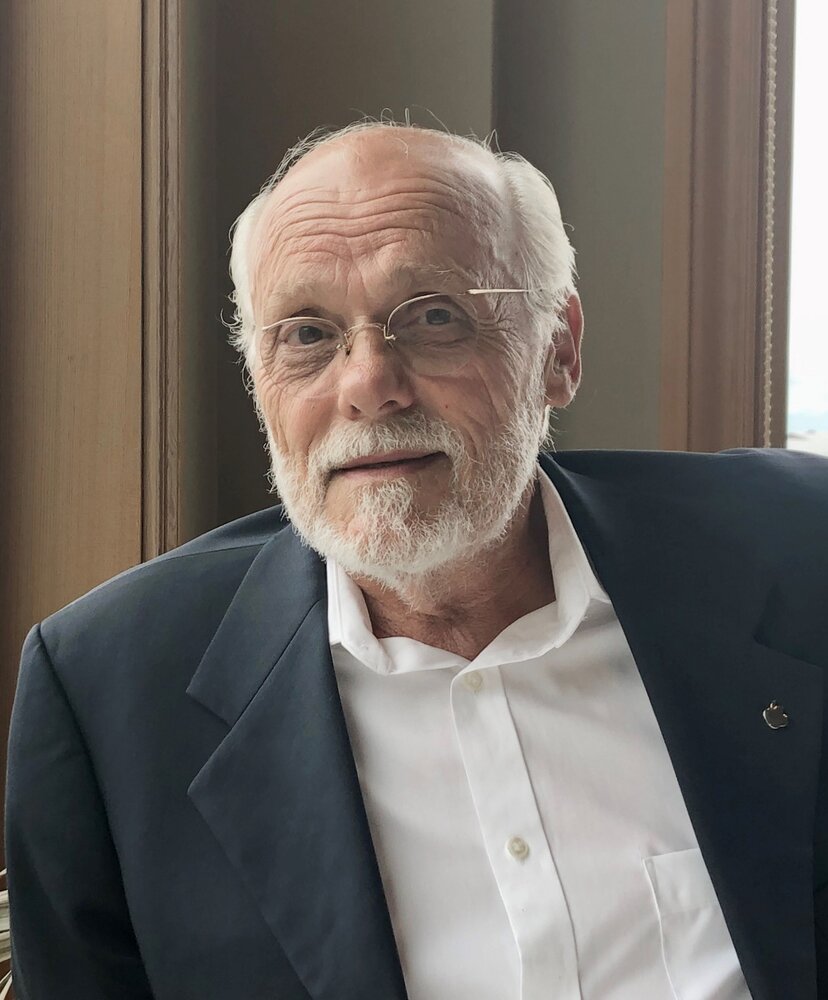 Brilliant, innovative, talented, with a wicked sense of humour, what Brian always wanted to be remembered as was as a lover of family, dogs, and his family’s homestead. True to form, Brian passed suddenly on Wednesday, March 16 at home, his beloved Golden Retrievers at his side. Brian is survived by his wife Suzanne (neé Womersley), sons Matthew (Kathleen), Peter (Tessa), and daughter Sarah (Scott); grandsons Parker and baby James, and four-legged friends Layla and Zoë.

Born and raised in Bowmanville, Ontario, to parents C. John (Jack) Elston and Elsie (neé Oke), Brian showed an early passion for all things electronic. With the help of his Dad Jack, he built a one-tube radio when he was just a child. Brian spent endless hours in his room on Concession Street listening to the legendary Wolfman Jack as he howled throughout the night.

Many years later, Brian enrolled in Ryerson’s Radio Television Arts Program and worked at CBC Radio when he wasn’t attending classes. These were magical years. He would sometimes share the lunch table with fellow CBC employees Fred Rogers, Alex Trebek, and others. He was working that night in October 1970, when the station manager told the broadcast staff that nobody was going home, as the FLQ crisis gripped the country.

As a student, his connection at CBC enabled him to contact Leonard Cohen, who graciously agreed to let Brian interview him for his thesis, and later invited Brian to visit him on his private Greek Island. His favourite memory of that time was listening to an out-of-work Hollywood producer named Gene Roddenberry talk about Star Trek. Roddenberry advised the graduating class to “head in the direction in which you look.”

He never did take Cohen up on his offer, but he did follow Roddenberry’s advice, and he never looked back. Shortly after graduation, Brian was hired by Buzz Communications to travel around North America, converting radio stations to the new rock and roll format. Along the way, he got to interview John Lennon, sing onstage with the Mamas and the Papas, and swim in a 30-foot bowl full of milk with the L.A. Lakers Cheerleaders to help launch Captain Crunch cereal. Brian even got to have lunch with his childhood hero, Wolfman Jack, and share his early memories of listening to him in the dark, back home in Bowmanville.

Brian returned to Canada in 1973 when the U.S. draft caught up to him, and he was advised to go home, or he would be going to Vietnam. Brian left the world of radio shortly after he returned to Toronto and entered the magical world of educational television. During his 32-year career at TVOntario, Brian rose through the ranks to Senior Production Editor, where he worked on Internationally acclaimed science programs, and pioneered digital television editing. Technology called again when Brian joined the Online Group, leading the new frontier that was the digital world. At the Online Group, he helped to create TVOntario’s online presence, and managed the creation of TVO’s digital asset management system.

When asked about his TVO accomplishments, Brian would likely say the smartest thing he did was ask a certain lady in the Marketing Department out for lunch. Six months later, Suzanne and Brian married on May 14, 1983. They settled in Brian’s family’s ancestral home in Courtice. Built in 1827, their home grew along with their family. Sons Matthew (1985) and Peter (1987) followed. Daughter Sarah made their family complete in 1994.

Retirement didn’t last long. Brian loved his job working part-time at The Apple Store in the Eaton’s Centre, where he got to hang out with tech heads half his age (or less). Known as the Old Guy, Brian quickly became the number three salesperson in Canada – all while working only a couple of days a week. One of his proudest possessions was a personal email from Steve Jobs, congratulating him on a job well done.

Despite all his accomplishments, when anyone asked Brian where he worked, his answer was always the same: “I work for my family”. And he did. He loved his kids passionately and would do anything to help them succeed. His advice to them was simple. Find what you love to do, and then figure out how to get paid for it. His dream for his children, after he was gone, was that they would be the best of friends. Wish fulfilled.

His happiest times were spent at home. If he wasn’t cutting the grass, tilling the garden, or fussing with some technology or other, he was walking the dogs or floating in the pool, weather permitting. At the end of the day, he liked nothing better than to share a drink with Suzanne on the deck, his retrievers on either side of him, and watch the sun go down over the fields that were once farmed by his grandfather.

Brian loved his life, his wife, his children, his grandchildren, his home and his beloved retrievers. He told his beloved wife Suzanne, the day before he died, as they walked the snowy field around their home, that his life was perfect.

In lieu of flowers, donations to the SickKids Foundation, the Ukraine Humanitarian Crisis Appeal of the Red Cross, or Golden Rescue would be appreciated.

To view the service virtually, please use the link below: