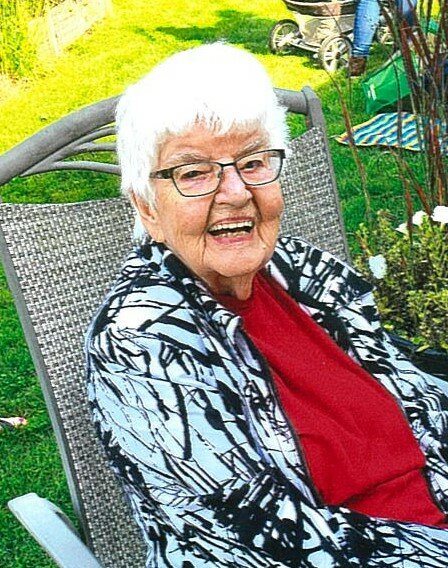 1:00 pm
Northcutt Elliott Funeral Home
53 Division St.
Bowmanville, Ontario, Canada
(905) 623-5668
Due to the weather, services have been postponed until Tuesday January 18th By Invitation Only, to view virtually please follow the link on the website

2:30 pm
Bethesda Cemetery
5823 Bethesda Road
Clarington, Ontario, Canada
Due to the weather, services have been postponed until Tuesday January 18th! All are welcome to attend, please maintain social distancing.

Elizabeth’s early years were spent at her family’s apple orchard near Haydon. She attended Haydon Public School, Bowmanville High School and went on to Normal school in Peterborough to become a teacher. Elizabeth enjoyed teaching in Starkville, Port Credit and Oshawa schools until 1955 when she married David. They farmed north of Tyrone for over 60 years, raising their family and created a lifetime of memories. Elizabeth was a devoted Christian who took an active role in her church and her community. After David’s passing in 2015, Elizabeth began a new chapter of her life at Port Perry Villa where she enjoyed her remaining years.

Due to current restrictions a Funeral Service will be held by invitation only on Tuesday January 18th, 2022 at 1 pm at NORTHCUTT ELLIOTT FUNERAL HOME, 53 Division St. N. Bowmanville.  Those wishing to live stream please follow the link below.  Interment will be held at Bethesda Cemetery at 2:30 pm, all are welcome to attend, maintaining social distancing.  In lieu of flowers, Memorial Donations may be made to Port Perry United Church, Tyrone United Church or The Heart & Stroke Foundation.

To view the service:

Share Your Memory of
Elizabeth
Upload Your Memory View All Memories
Be the first to upload a memory!
Share A Memory