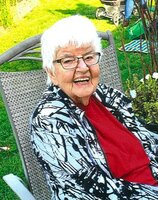 Elizabeth’s early years were spent at her family’s apple orchard near Haydon. She attended Haydon Public School, Bowmanville High School and went on to Normal school in Peterborough to become a teacher. Elizabeth enjoyed teaching in Starkville, Port Credit and Oshawa schools until 1955 when she married David. They farmed north of Tyrone for over 60 years, raising their family and created a lifetime of memories. Elizabeth was a devoted Christian who took an active role in her church and her community. After David’s passing in 2015, Elizabeth began a new chapter of her life at Port Perry Villa where she enjoyed her remaining years.

Due to current restrictions a Funeral Service will be held by invitation only on Tuesday January 18th, 2022 at 1 pm at NORTHCUTT ELLIOTT FUNERAL HOME, 53 Division St. N. Bowmanville.  Those wishing to live stream please follow the link below.  Interment will be held at Bethesda Cemetery at 2:30 pm, all are welcome to attend, maintaining social distancing.  In lieu of flowers, Memorial Donations may be made to Port Perry United Church, Tyrone United Church or The Heart & Stroke Foundation.

To view the service: