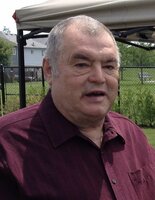 It is with heavy hearts to announce the passing of Neil McAllister on December 30th, 2021 at Lakeridge Health Oshawa with his family by his side at the age of 78.

He was predeceased by his parents John and Mary McAllister, sister Anne O’Hagan and very recently his brother in law Tony O’Hagan.

Neil was born in Paisley, Scotland and grew up with a passion for football (soccer), an avid player and fan of the sport, especially his favourite team St. Mirren.  He was also a talented cabinet maker, loved dogs, travelling and enjoyed singing. He immigrated to Canada at the age of 23 seeking new opportunities where he met his wife and started a family, settling in Orono, Ontario in the late 70’s.  He continued to play and later coach football to his children’s teams and found a new passion for Canadian hockey and the Toronto Maple Leafs.  Shortly after arriving in Canada he found employment at John Wheelwright Ltd., promoted to General Superintendent and often travelled to various site locations for work including a memorable project in Alert, Nunavat – the northernmost continuously inhabited place in the world.  He was a member of UBC27 and retired from Wheelwright after 44 years of continued service. In recent years, he and his wife Barbara have enjoyed many happy memories and new friendships made at the local Bowmanville Older Adult Association including the men’s football (soccer) team.

The family would like to thank the doctors and nurses at the ICU at both Lakeridge Health Bowmanville and Oshawa locations for their care and compassion for Neil.

Due to current restrictions a Service by invitation only will be held at NORTHCUTT ELLIOTT FUNERAL HOME, 53 Division St. N. Bowmanville on Thursday January 13th, 2022 at 1 pm.  Those wishing to view the service virtually please follow the link below. A Celebration of Life date will be held when it is safe to do so.  Memorial Donations may be made to Diabetes Canada.