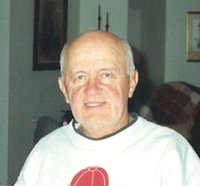 Missed terribly by his wife of 66 years, Annabell; his daughter, Christine (Ron); his brother, Harry (Rose); his much-adored grandchildren and their partners; his great-grandchildren; his daughter-in-law Kathy and her husband Wayne; and the family members and dear friends who meant so much to him.  He was predeceased by his parents, John and Ann, as well as his beloved son, Billy.

John would have loved a parallel universe, where he could simultaneously play every day, while also spending the day watching his other favourite sports on TV.  I think that we’ll all smile a little every time it’s playoff season – for any sport, really – and wish that he were here to offer coaching pointers from his chair.

Sports were the only thing that John would put his feet up for, and he enjoyed them all the more for it.  He had a work ethic that had him working and volunteering right up until this year.

Family dinners won’t be the same without his stories; his memories about the great Mennonite cooking he grew up with; and that big, booming laugh of his.